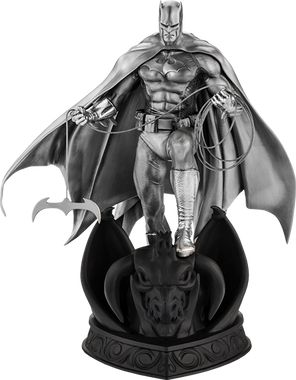 or make 4 interest-free payments of fortnightly with

Is there any more compelling image of triumph over evil than Batman surveying Gotham City ready to strike fear into the hearts of those who would do us wrong?

Artist Alan Quah and sculptor Mufizal Mokhtar have captured the essence of the Batman ethos in this stunning pewter sculpture from Royal Selangor.

Now you can be one of the lucky few to have your own limited edition meticulously rendered pewter statuette.

Royal Selangor and DC Comics have joined forces to bring you the recently announced release of their greatly anticipated collection showcasing the Dark Knight and some of Gotham City’s most villainous villains.

Inspired by Jim Lee’s comic renditions, the artist commissioned for this project was Alan Quah Founder of Komikaki Studio.

Alan also has worked on other projects for DC Comics as well as Heroverse, Capstone, and Titan Comics.

The sculptor for the project was Mufizal Mokhtar, formerly Senior Art Director/Sculptor At Ubisoft Singapore.

Mufizal is a highly talented sculptor who is well known for his ability to render fantasy characters.

The Dark Knight is poised to swoop from his gargoyle perch and deal swift justice to the supercriminals preying on the good citizens of Gotham City.

Batman’s powerful aura is projected through the bulging muscularity, dramatic sweep of his cape and fully detailed texture of the Batsuit.

The exquisite detailing of the pewter figurine is accentuated further by final buffing and polishing.

This product hasn't received any reviews yet. Be the first to review this product!

All prices are in AUD. Copyright 2021 matthewthomas.com.au. Sitemap | Ecommerce Solution by BigCommerce